Why I Don’t Do HD 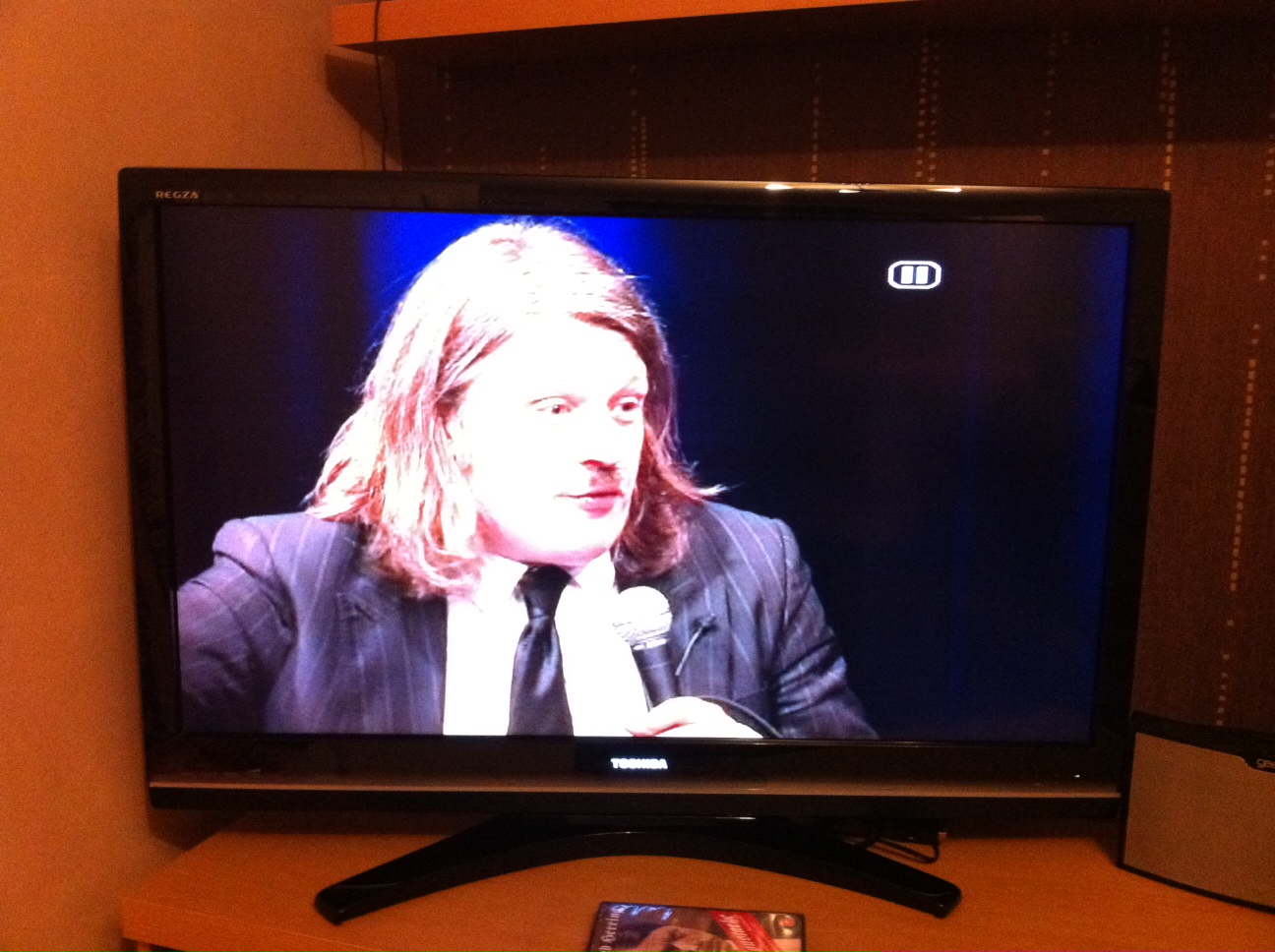 I’m sick to death of having HD shoved down my throat. Everywhere you go it’s ‘HD this’ and ‘HD that’ even to the point where people make up new meanings for what HD actually is. I overheard a salesman telling an old woman that she needed a HD-ready TV so it will still work after the digital switchover – the poor old dear only wanted a 14-16inch TV for in the kitchen!!

A friend of mine (@echoingsounds) asked if I’d seen ‘Abatoir‘ (I may have misheard him though) to which I answered “yes’ – because I have an I didn’t see the point in lying about such a  trivial thing. He then said “Oooooohhhhhh, wait until you see it in HD!” to which I responded “Why? does it make the story better?”. Completely missing the fact that I wasn’t overly impressed with the film he simply said “No, it just looks amazing”.

Now, my Toshiba TV has some brilliant up-scaling built in and even old DVD’s in SD (Standard Definition [720 x 576]) look great. If you look closely (see below) you can see some pixelation on the edge of Mr Herring’s (@Herring1967) suit and some of the strands of hair aren’t quite distinguishable from each other. 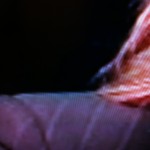 However, it’s very rare that I watch a DVD from such close proximity. Sometimes this might be my view: 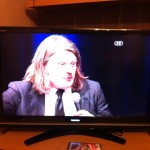 Looks fine, doesn’t it? However, in general, this is my normal view: 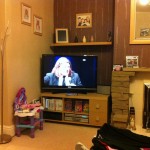 The extra resolution, on a 42″ TV, is something and nothing. You don’t notice it or need it in normal, everyday use. Anything over 42″, in my opinion, does benefit from HD (although you obviously need a HD source – something else the salesmen never tell the often naive customers) as the pixelation gets to a point where it’s quite distracting.

OK, so, it’s clear I’m happy with DVD’s over BluRay but what about TV? Well, what about it?! I’ve started thinking up more and more random retorts to the Sky HD salesmen in the Kirkgate Shopping Centre in Bradford. Initially I started by being quite polite, “No thanks”, “Not for me” until they started really getting on my nerves by asking me 4 times in the space of 5 minutes – surely a bloke with 2 young kids is quite recognisable after asking them twice in such a short space of time? More random retorts include “I’m a virgin”, “Sky TV is of the devil”, “I already have a credit card”, “I don’t have a credit card”, “Don’t touch me there”, “Stop following me” and “Are you my mum?”. I need to think of a killer retort though for next time… I don’t need HD TV, probably 80% of the country don’t need HD TV. Yet there are a huge number of people forking out a small fortune for Sky HD and Virgin Media HD. In reality though most of the programmes are broadcast in up-scaled SD as opposed to actually being HD programmes. In which case, my TV does just as good a job. There’s an option on Sky HD box to have it display in the EPG which programmes are up-scaled and which are actually broadcast/filmed in proper HD. Last time I looked HD programmes were the minority – admittedly this was about 9 months ago so things may well have changed. The point still stands though that just because you have a HD TV, a HD digi-box (Sky HD, Virgin HD or Freeview HD) doesn’t mean that everything you see is HD.

We use Freeview for our TV – I’m from Yorkshire therefore I’m tight-fisted and, hence, reluctant to pay for extra TV channels that I will never watch. To be perfectly honest most Freeview channels look good on my TV (the ones that don’t are ones I wouldn;t normally watch anyway) – admittedly because of the very good up-scaling algorithms that Toshiba use. The ‘pixelation’ seen with Freeview isn’t so much the fact that it is not HD but more the fact that there are too many channels on a single multiplex. For those who are not aware how Freeview works, basically there are 6 frequencies/”channels” that are broadcast – these are known as Multiplexes (Mux for short). Each Mux contains multiple TV channels which your Freeview device decodes and splits up into the normal everyday ‘channels’ that you are used to. That’s why with a poor signal you don’t lose one channel – you lose a group of channels which are all broadcast on the same frequency. In order to fit more channels onto a single Mux the broadcasters have to reduce the quality of the video and audio – this is most noticeable via ‘artefacts of compression’. Have you ever saved a jpeg photo in really low quality and seen the ‘blocky’ effect that arises? This is caused by the compression used to keep the image file size small. Freeview images are, essentially, lots of jpeg images thrown together to make video and they suffer the same form of compression ‘blockiness’. See below for an example of jpeg compression (click it for full size!): 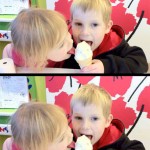 In the top photo you can make out a lot of the detail, you see nice gradual fading of colours and nice sharp edges. However in the bottom you can see ‘blockiness’ where the compression tries to reduce the number of colours; the end results are that subtle shades are lost, sharp edges become blurred and the picture, overall, looks pretty crap. Now, imagine this in every frame of a video broadcast – you’ve probably seen it yourself if you’ve ever had the misfortune of watching football on the telly. Sometimes the pitch is very blocky instead of a nice subtle, varying shades of green like it should be – this is due to the compression.

Now, different Mux’s have different numbers of channels and, therefore, different rates of compression – you can only fit so much data into a single Mux broadcast due to bandwidth limitations. Mux 1 with 5 TV channels (BBC1, BBC2, BBC3, CBBC, BBC News, BBC Red Button and a few BBC Radio channels) has noticeably less compression than Mux 2 with 8 TV channels (ITV1, Channel 4, Channel 5, ITV 2, Channel 4+1, More 4, E4, ITV1+1 and a couple of text and radio channels).  [NB: I am in  pre-switchover area so these Mux’s and channel listings will differ elsewhere]. HD TV or not, the Mux2 channels will always look worse. [For a fairly concise explanation of bitrates/compression/bandwidth have a read of this from UKfree.tv]. So when a salesman or demo TV shows you a comparison between a Freeview channel and their Sky HD set up you might like to point out that it’s not a fair comparison. They are implying that Freeview is bad and Sky is great – you would see exactly the same difference between normal Sky (not HD) and Sky HD – and seeing as a lot of Sky channels are actually really only SD, are they really any better than Freeview? They are selling you a few channels and programmes in HD but not everything you get will be HD.

I’ve heard a few people say that you need HD to be able to see the real beauty of some of the amazing BBC wildlife documentaries. I beg to differ. On Freeview (SD, not Freeview HD) on my 42″ TV those documentaries STILL looked absolutely stunning – a lot f it is the camera and filming techniques used. Admittedly if it was broadcast on, say, ITV on Mux2 with more channels resulting in more compression then, yes, the HD boys would have a point – the fact is, though, that ITV don’t make nature programmes like the BBC do anyway so it would never happen so it’s a moot point.

After the digital switchover (September this year for me) the analogue channels will be removed which will effectively give Mux’s 1, B, C & D 33% more bandwidth (i.e. they can use less compression) then Freeview video SHOULD look better anyway – i.e. the same as ‘normal’ Sky or Virgin TV. Still no need for HD.

Personally I think that HD is very over-rated. Most people simply do not need it and are buying into the very clever marketing people. The number of channels and programmes broadcast in HD is pretty small too so, in my eyes, not worth the extra cost to get it. There is a plus-side to this though – the more people that use BluRay over DVD, the cheaper DVD’s (both new and 2nd hand) are for me!