So, with the launch of iOS4.1 and Game Center I thought I’d write a brief blog on my thoughts so far.

Why Game Center is the worst social network… ever:

And now for the good parts;

Why Game Center is the best social network… ever:

Congratulations, Apple, on pleasing everyone – those who love, and those who hate, social networking!

Going back a couple of years I used a T-Mobile MDA Compact III (HTC Artemis) as my main phone. It ran Windows Mobile and was pretty slow and clunky at times; but it worked. It had mobile internet (although no 3G), it had GPS, a Micro SD slot for expanded memory (although you had to shut it down and remove the battery to access it). I actually liked the phone – it was my first PDA / Smart Phone which brought me out of the world of Samsung who I had sworn by for the years leading up to my switch. One thing I loved about it was it’s customisability (is that a real word?!) – the sheer number of programs (they weren’t called ‘apps’ back then) you could get, the majority of which were free. Great programs that ranged from registry editors and media players through to screen capture and satnav’s. You could just… fiddle with it! END_OF_DOCUMENT_TOKEN_TO_BE_REPLACED

I would dearly love to show you some video from Monday’s Green Day gig at Sheffield Arena however my iPhone was stolen and was last ‘seen’ in Liverpool, near Kensington Gardens… 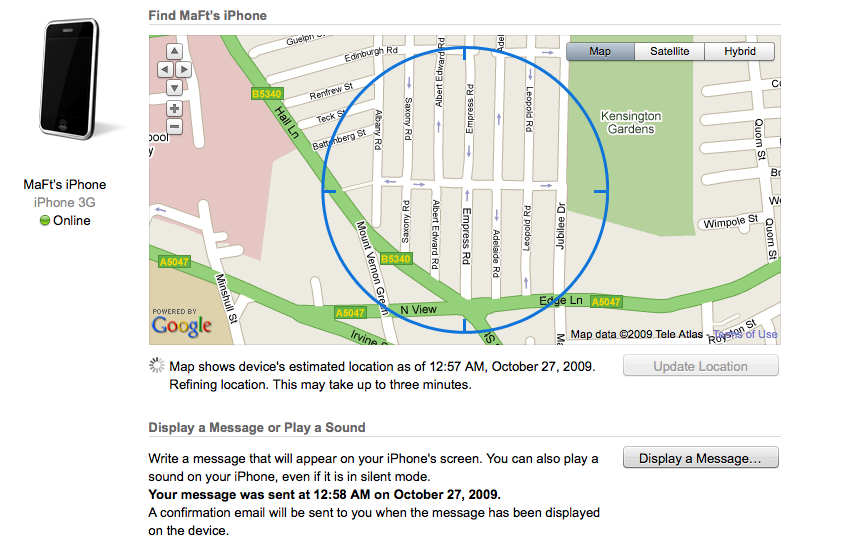 On Sunday night my car was broken into as well. Nothing was taken but it did mean I had to pay for a replacement window and the hassle involved.

END_OF_DOCUMENT_TOKEN_TO_BE_REPLACED

Those who follow me on Twitter will already be aware of my antics this past Saturday afternoon. Me and Mini-MaFt went geocaching – now if you don’t know what it is then check out the geocaching website but, put simply, it is a GPS/SatNav-based treasure hunt. You get a set of coordinates from the website along with a title and a clue and you have to find the ‘treasure’. Groundspeak, the company behind the geocaching website, recently released an iPhone app which links to the geocaching website allowing you to find local caches, see the hints and read other peoples reports on how they got on.

Armed with my iPhone, a couple of goodies (you can leave items for other geocachers in some of the larger caches or do swaps for items already in the box) and a thick coat (it was blowing a gale, but at least the rain had stopped); me and Mini-MaFt headed out across the field towards our local alpacca farm for our first ever cache. END_OF_DOCUMENT_TOKEN_TO_BE_REPLACED

Working for/with PocketGPSWorld.com has it’s perks: various satnav’s, navigation software, new devices & gadgets, best speed camera database and, erm, ahem, random days off to go to theme parks….! I’ve got a few navigation apps on my iPhone and thought a trip to Pleasure Island, Cleethorpes would be a good time to give them a proper road test. To be honest I’m still not fully convinced that the iPhone is the right platform for navigation software (I much prefer Windows Mobile or (my limited use of) Google Android for these types of things) and so I took my ‘normal’ TomTom with me too.

We were running a bit late yesterday morning so I used the TomTom on the way down as it was easier to set up quickly – I couldn’t find my iPhone holder and charger right there and then! For the return journey, however, I planned on using a mixture of Sygic, CoPilot and iGO to get us home safely. First up was CoPilot which loaded nice and quickly but then seemed to crash on the main menu along with a bit of a graphical glitch. No problems I thought, kill the app and start it up again! Then the fun began, CoPilot decided to hang on the splash screen and just would not load. Next up I tried iGO which, too, hung on the splash screen – not the best of starts… Finally I gave Sygic a shot, fearing the worst and preparing the TomTom for a return trip. My fears were not compounded as Sygic started up and ran with no issues. Later on I gave iGO another shot and it was fine but then when I tried CoPilot it still hung on the splash screen. I actually think the initial problem with iGO was due to memory issues as I tried loading it as soon as CoPilot had crashed out on me.

Anyway, my point being, had I only had CoPilot with me I would have been rather stuck. The only way to reinstall it is to remove it from the iPhone then reinstall it via iTunes on the PC – now, if I had been away for a week or two and that happened…! Thankfully today I had a back up (I actually considered taking only the iPhone). I find I have started to rely on technology a little too much and I may have to dig out my old paper map as a contingency plan – if one of my actual satnav’s packed in while dodging camper vans through the hills around St Ives I doubt my homing instinct would serve us particularly well!

Anyone who knows me knows I like cheap. Even better than cheap is free. So it may surprise you that in a bizarre turn-around I’ve actually bought an iPhone app that was £5.99!

I like my music and I’ve been using Collectorz.com Music Collector for about 7 years now. MuC (as it is often referred to) is a fantastic piece of Windows and Mac database/collection software specifically for cataloguing CDs, LPs etc. It has a tonne of features that can be viewed via their website (I’m blogging this on my iPhone so am too lazy to fully review it!) but earlier today their ‘clz music’ app was finally added to the AppStore. So I bought it!

Now, instead of having to export my collection to HTML, format it, split it into groups by letter, upload and update the search database I can simply export it to my iPhone and view/search from there! It’s great! No more will I be rummaging around Discovery (local 2nd hand music shop) and end up buying a CD I already own (yes, I’ve done it a few times) or cursing the shopping center for no GPRS signal to check my collection online…

Oh, they also have software for movies, comics, books, photos most of which have iPhone apps to go with them.

After my rant yesterday about iTunes being a bit rubbish at managing libraries over the network I’m going to eat a bit of humble pie… I thought I’d give it another try and it seems to be OK now. This could be down to one of two things either 1) an update to iTunes solved some issues or 2) better account control on Windows 7 RC. I’m going to opt for a mixture of the two!

I’ve also been playing with ‘Remote’ for the iPhone which works really well. Just to have the iPhone sat next to me to switch tracks without having to keep switching to iTunes itself – it’s really lazy but could be handy if I ever connected the laptop to the stereo for parties. Which I might now it works properly!

The new iPhone software has been officially announced and is being released to the public on 19th June. I’ve been using the beta for a while now and yes, there are some very good new features – perhaps features that should have been included from the outset?

One of the new features that’s not actually available easily yet in the beta (without some hacking) is tethering – use your iPhone as a 3G modem for your laptop. Great I thought! Until I read on the o2 site that you need to get a tethering bolt on at £14.68 for 3GB/month or £29.36 for 10GB/month. OK, that also includes unlimited WiFi at the Cloud (and soon BT Openzone) but when you can get 5GB/month on a Three USB dongle it makes you wonder if it’s actually such a good deal… I know that I’ll be just using my £5, 1GB/month Virgin dongle – at least until the prices drop or they let you use the standard Web bolt-on!