Mrs-MaFt works shifts so child-care is relatively easy. If she’s working then I do the school/nursery runs and catch up on my work later in the evening once it’s passed bed o’clock for the kids.

If I’m not too well I can still get work done without worrying about infecting my fellow co-workers with the lergy. With an office job I would lose a whole day even if I would have been well enough to get some work done.

I could come to work hungover and no one would know.

I could come to work naked and no one would know.

I could come to work naked and hungover and no one would know.

If I lie in (unlikely, I have kids!) it takes me 12 seconds to commute down the stairs and open my laptop.

I can nip out to the local Farm Shop, Morrisons or Town during the day and miss the busy times.

Courier deliveries result in actually having your item when they deliver it rather than having until the weekend and then driving a 15 mile round trip to pick it up from the depot.

It can be all too easy to waste too many hours dicking about on eBay or doing too much research on a gadget I simply can’t afford to buy.

People assume that, because you’re at home, you’re not busy and can jump to their every whim.

It can get quite lonely at times. A lazy, fluffy black cat and a handful of cyber-colleagues on instant messenger software just doesn’t match real, actual physical company.

On a morning if I have Mini-Mrs-MaFt then, generally, she will be watching CBeebies. That itself isn’t a bad thing – it keeps her entertained and she practises her dancing when there’s some music on. However, as pointed out by ‘Mrs TheBoyAndMe‘, it usually results in having “please tell me, please tell me, pleeeease teeeeell meeee your name” stuck in your head for too many hours.

It’s too easy to get lazy. Sometimes after Mrs-MaFt has taken Mini-Mrs-MaFt I can’t be bothered switching from CBeebies to Kerrang! Radio on the tellybox.

Working at home has it’s pro’s and it has it’s cons. However, I wouldn’t change it for anything! Following various people on twitter and general day to day dealings with other real people it would seem I am in a minority – you see, I actually enjoy my job and the work I do. I work with some great people spread out about the world in various different time-zones yet still get time with my family. A lot of jobs can’t offer that flexibility – if I had to commute more than a staircase away then that would, straight away, remove 2 hours of available time from the day. And I’d like to keep those those 2 hours, thanks! 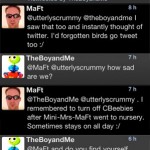 Well, in case you were wondering what brought this post about, it was the result of a brief conversation on twitter with @TheBoyAndMe. Click the image to the left to see the whole thing. It’s a quite tenuous link once you actually read it, but that’s what made me think of writing the post! Having CBeebies songs in your head is definitely a ‘con’ of working at home!

Can I Be Committed?