I’ve been a fan of Aussie rockers, The Living End, for over a decade although I’ve only ever seen them live once. They play catchy rock music infused with punk and some rockabilly – it’s all good! One thing that helps them stand out is the double bass that they use instead of a normal bass guitar. It gives it a definitive sound and also looks awesome on stage!

I blogged this after Leeds Festival 2009:

It was soon time to teach Shaun how awesome Australians could be with the fantastic The Living End. Not only do these guys play great music (punk-rockabilly is the easiest way to explain!) but they put on an amazing performance too! This was the first time I’d seen a bottle-neck slide used that was not only still attached to the bottle but also still full of beer – although the guitar tech wasn’t pleased to have to clear all that up… The upright bass also makes for good entertainment value with various spins and an extra platform to stand on. You may be able to guess, but I was blown away by The Living End!

And here’s a couple of photo’s and a video: 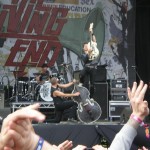 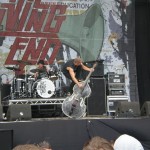