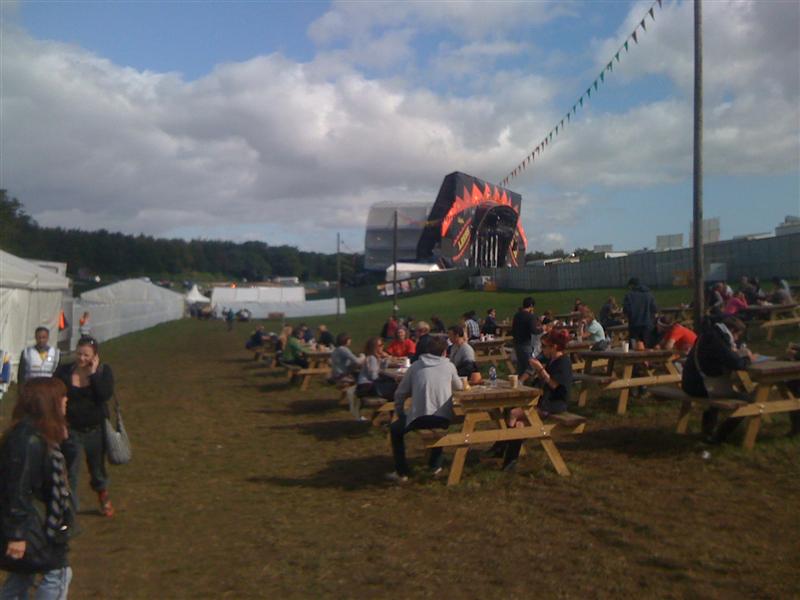 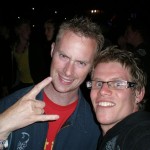 OK, so, first up on the Main Stage we had Kids In Glass Houses from Wales. I’d only recently heard of these after asking Punktastic Paul on Twitter for some new bands to listen to. They were great on Spotify and great live! One of the best festival openers I’ve seen. They drew quite a big crowd too for so early in the day but they certainly deserved it!

We then headed up to the BBC1/NME tent for In Case Of Fire who looked rather neat and tidy in their matching red shirts and black armbands.They were alright to listen to but some of the songs sounded a bit samey and I never really ‘got’ why some bands have a uniform… In fact even Shaun said to me that if I ever said that we (seventyseventimes) should have a uniform then he would quit!

Next up we headed to the Festival Republic tent and caught a bit of The Magistrates (I think that was their name) – not really my cup of tea but I could see why people would like their disco/rock/pop kinda sound. Anyway, by this point I wash hungry so we headed for a pint and a burger in the Guest Area – much less queuing time!

It was soon time to teach Shaun how awesome Australians could be with the fantastic The Living End. Not only do these guys play great music (punk-rockabilly is the easiest way to explain!) but they put on an amazing performance too! This was the first time I’d seen a bottle-neck slid used that was not only still attached to the bottle but also still full of beer – although the guitar tech wasn’t pleased to have to clear all that up… The upright bass also makes for good entertainment value with various spins and an extra platform to stand on. You may be able to guess, but I was blown away by The Living End!

Another bit of wandering round, past the ladies urinals and we found The Teeth playing at the BBC Introduces stage. An obscure, quirky, synth-pop band in matching reflective silver jackets (uniforms again!) that was actually strangely addictive! They had the best line of the day too with: “our bassist has two children; that means he’s had ful sex at least twice”.

Next stop was the Alternative Stage which ended up being the comedy tent for over half of the day. We saw a string of three comedians who were all very, very good. Doc Brown, a rapper-come-comedian, had a great mix of rap and comedy (rather unsurprisingly) and had a very good set. Holly Walsh was fantastic at ad-libbing with the crowd and was , again, very funny. The ‘headline’ for this section was Brendon Burns – probably Australia’s angriest export who spent ten minutes of his set trying, successfully,  to get a heckler to the front because no one could hear what he was saying. By the end of his set my face was aching from laughing so hard!

We then headed over to the Main Stage for the Yeah Yeah Yeahs who were, to me at least, more like No No Nos… There were one or two half decent tracks but it was a bit too indie-poppy-rocky for me. We hung around to see some of Bloc Party who I actually quite enjoyed considering I’d never heard any of their music before.

To finish the evening we headed up to the Radio 1 / NME tent to catch the end of the Gallows’ set; a bit of a shout-fest culminating in a few blokes banging on snare drums, one of whom was wearing just their boxer shorts – well, he was until they were leaving the stage where he was rapidly de-kegged!

Next up were AFI, a band I had seen back in 2000 supporting The Offspring. At that time I wasn’t a massive fan but have since grown to love their pretty unique style. I was very much looking forward to their set and I wasn’t disappointed either! We were about 7 or 8 ‘rows’ from the front and in the 2nd song when singer, Davey Havok, was in the crowd it all went a bit mental – subsequently I lost Shaun! They played an incredibly energetic set and, even though Havok was clearly exhausted, he didn’t let it get the better of him.

The Radio 1 / NME headliners were LostProphets – a band I can listen to on record but I’ve never really got into them. I hung around a bit further back mainly to recover from AFI but also I thought I’d let the real fans have a chance of getting closer to the front – how generous am I? I recognised a few of the songs and the whole audience loved them. I did like the gig but not knowing any of the songs does make a difference with this band. Earlier in the day we saw The Living End and there were a lot of the newer songs that I didn’t know but they were great performers so it made it enjoyable. LostProphets, however, were very good BUT harder to enjoy without knowing the songs.

Partway through the set I headed down to the Guest Tent to grab a Relentless to keep me awake on the journey home – it set me back £3 but you start to get used to the extortionate prices at events like that. Back at LostProphets I located Shaun who also had a Relentless but, to rub it in, his only cost £2 from the general punters stalls… Grr….

Anyway, we got home tired, sweaty, smelly and all rocked-out! An awesome day was had by all!