Moving to BT: Not The Best Start… 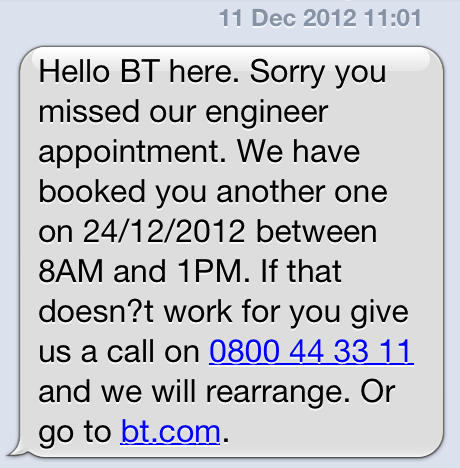 On Friday 23rd November we exchanged contracts and agreed a moving date of Friday 30th November. On that day I also ordered BT’s Infinity 2 60MB Fibre Optic Broadband Package as my previous supplier of 60MB broadband, Virgin Media, don’t do our new address. After ordering I was told they couldn’t connect it all up until Monday 10th December. A bit annoying, but I could live with tethering on my phone.

Monday 10th came and my son had been admitted to hospital the night before however Mrs-MaFt was at home for when the engineer arrived at 8.45am. This is when the problems started… The engineer couldn’t do anything because, it turned out, BT had not activated the phone line. He had another job to get to but said he would try get back later in the day or, at the latest, he would come the following day and get it all done. Slightly more annoying but I could live with a one day delay. So, later in the day I get a text message and an email confirming the phone line is now up and running… but no broadband engineer was to be seen. That’s OK, he said he would come back the next day.

The following morning I get this text message from BT: 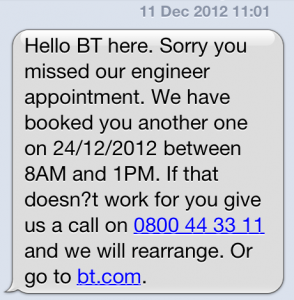 What?! I missed the appointment? And you expect me to wait another 2 weeks??!! I was, as you may expect, pretty fuming. I could maybe understand having to wait another 2 weeks if we had actually missed the appointment, but considering someone was in all day even while our son was in hospital I think we did pretty damn well at keeping the appointment! So, I phoned them up to see what they were playing at. Basically they admitted it was their fault and they don’t expect me to wait two weeks until the engineer can come back. So they said they would fast-track it and try get someone out in the next few days – I confirmed that any day that week would be fine. They said they would check with the engineering people and get back to me later in the day.

‘Later in the day’ came and there was still no call returned – this was about 6pm. So I phoned them back. After going through the whole story again I was told that it was on my account that they would phone me the following day (Wednesday) so I queried why I was told it would be the same day when they called back. He also said there’s nothing he could do as it’s been escalated already.

The next day I got this: 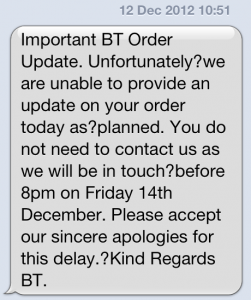 Guess what? I was a little bit annoyed… Actually, no I wasn’t, I was VERY annoyed (with capital letters). As I was told not to phone them I went to The Twitter to have a bit of a moan to @BTCare who, to be fair to that department, seemed to be trying to be helpful. However as it had already been escalated and I’d been given a date/time that they would contact me by they couldn’t really do much else.

Yesterday to rub some more salt in my wounds they sent me a bill for my broadband services. You know, the one they haven’t actually provided me with. Remember I’m still not allowed to phone them so I went to their online chat to ‘discuss my bill’. Here’s the conversation I had (click to enlarge): 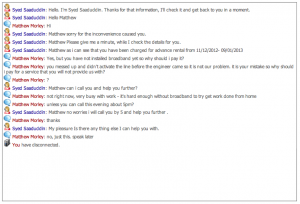 Five o’clock came and went with no return call from Syed Saaduddin. To be honest, I’m used to being let down by BT now that it didn’t actually annoy me that much. Perhaps this is their super new business idea – annoy their customers so much that they just drop dead in exasperation!

So now, here I am, sitting, waiting for BT to call me. They currently have just over 3 1/2 hours left to call me and give me a new installation date. And explain why they haven’t done anything that they promised. And why they are charging me for a service they aren’t providing. And why they seemingly don’t understand that the ‘T’ in ‘BT’ is, basically, for ‘COMMUNICATION’ – which they seem inept at.

I’ll update later tonight or tomorrow with whether or not they actually call me before 8pm. If you want a sneak peak though you can follow me on The Twitter via @MaFt where no doubt I will be doing some suppressed swears shortly after 8pm. When BT’s lines are probably closed…