There’s a large amount of building work going on in one of the building’s where I work. Walking past it earlier today I noticed that they’ve literally taken out the whole of the ground floor with only a couple of supporting columns holding up the ceiling and the 5 floors of concrete-building above it.

Now, anyone who has played Jenga knows that the less support there is on the bottom, the higher the chance of the tower falling over. Take figure 1, below: 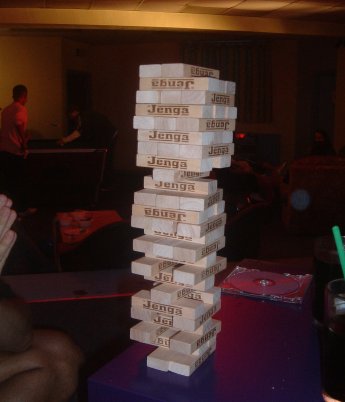 Of the two remaining blocks on the bottom, if the right-hand one was removed the tower would balance, perhaps rather precariously, but it would balance. If one were to remove the left-hand block then, quite clearly, the tower would collapse and everyone would mock the rubbish player and make them rebuild the tower for the next game.

Now, I am not a professional builder (if you’re interested I am, in fact, a Biological Research Technician at the University of Leeds) but to me it seems as though by removing the ground floor of the building they have essentially ‘removed the left-hand block’. I sure as hell hope they know what they’re doing…

I May Not Be Governor of California, But I'[…]