K is for… Kicking

Fact: you can’t beat live music. Nothing comes close to the atmosphere that exudes from a bunch of musicians playing their hearts out on stage. These days getting to a gig is a rare treat (childcare and money usually being the main obstacles) but from the late 90s to early 00s I was a regular gig-goer. I’ve lost track of the bands I’ve seen live but I might attempt a list for ‘L is for… Live’. We’ll see how my memory is!

Lancaster, as much as I love the city, is hardly a hotbed of live music venues. At uni we’d usually head to Manchester for gigs by train or, when Scru’ got his mum’s car (called Henry) he’d drive. Funny story: we nearly got car-jacked once while eating a post-gig kebab in the car in Salford… (‘S is for… Scary’?)

In November 1998 I saw an advert for a band called [spunge], I’d not heard of them but it said they were a ska-punk band. It also said they were playing in Lancaster at The Yorkshire House. A little pub close to the uni’s nightclub. For whatever reason I couldn’t persuade anyone to come with me so I went on my own… And I’m really glad I did!

I was probably late as I don’t remember any support band so I grabbed a pint, paid my £2 entry fee and waited for the band. When they came on I was greeted by a bunch of lads only a few years older than me with an awful lot of energy. They played mostly their own songs as well as a few covers like ‘500 Miles’. I was instantly hooked, bought their EP, “Kicking Pigeons” and chatted with them for a bit afterwards. 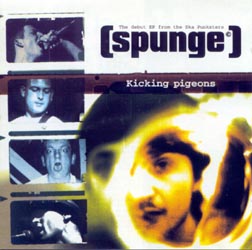 I’ve seen them numerous times since that night and will always recommend them if you want some lively, happy music.

So, K is for Kicking Pigeons.

L is for… Live