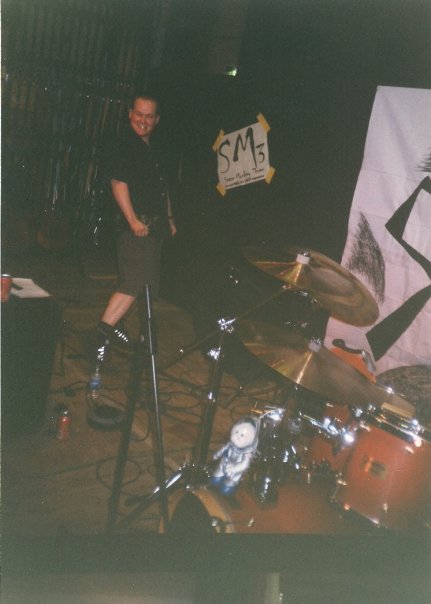 I started Uni in Lancaster on 28th September 1998. I was nearly 18.5 years old and I was ready to put away childish things (like being called ‘Maff’) and become an adult (called ‘Matt’). During fresher’s week I was chatting to someone at a nightclub about Green Day and got onto the subject of their album “Kerplunk!” and, in particular, the song “Who Wrote Holden Caulfield?”. Neither of us could remember the first line of the song though. With perfect timing a lad walked past wearing skate shoes, a huge wallet chain and none other than a tatty Green Day t-shirt. I grabbed him and without any form of introduction shouted at him “what’s the first line of Who Wrote Holden Caulfield?”

He looked at me like I was a complete stranger that had just grabbed him and shouted a random question at him. And rightly so. Then he replied “a thought burst in my head” and a new friendship was forged with Jim.

Jim played bass and loved the same music as I did although we still managed to introduce each other to new bands. He was also mates with a local drummer, David, who played at St Thomas’s Late Evening Service (St T’s LES). I can’t recall the ins and outs of the whole thing but we ended up starting a ska-punk band. There was only one small problem though, we couldn’t play ska!

So we started off with a few covers to get to know each other’s styles and then started writing some of our own stuff too. Jim and I were punks at heart and David was a hardcore drummer – so the resulting sound was a slightly heavier punk/rock mix. It was fun, and when I listen to it I still really like the style we had. Ok, so my vocals weren’t always in the same key as the music; Jim’s aim wasn’t that great and he hit the odd bum note; and David was a self-proclaimed music industry whore who once scared the CU sound guy by shouting ‘bollocks!’ at him during a sound check one night… But we had a laugh. And curry. Lots of curry.

We were finally ready to gig, we just needed a name… I’m proud to say that I thought of the name we all agreed on: “The Linda McCartney’s”. It was perfect, it had a great ring to it and reeked of punk! We were a bit concerned about the former-Beatles’ wife not wanting her name to be taken in vain or wanting us to use her vegetarian food brand as a name for our crappy little band though. So to get around this before it was an issue we changed the spelling: “The Lynda M Cartney’s” (with the McDonald’s arches for the ‘M’). What was that about copyright…?!

So, we played our first gig supporting some little indie band at one of the bars at uni. They were pretty dire to be honest. But we’re had fun, I think. We had beer at least…

David did (still does do) a lot of work for Meltdown Christian Hard Music conference and he somehow managed to persuade them to let us play. Although a lawyer friend insisted that we change our name… So here the hunt for a new name began!

We had numerous brainstorming sessions using the old rule that if you still like a name after 3 days then it’s a keeper. I can’t remember the exact order but here are a few of the names we considered:

“Tonk” – this is the sound you make when you hit a drum. It goes “tonk”. I’m not sure what the exact rejection criteria was for this one but we decided not to use it. Thinking about it today if day it may have sounded a little too childish.

“Spume” – this is the froth you get on polluted rivers. It sounds too much like “sperm”. End of.

“Hello Colin” – these were the last words David’s granddad said to him. To this day he still doesn’t know who ‘Colin’ was… As much as I loved this name, it didn’t survive the 3 day test.

In the end we settled on “Space Monkey Three“, or “SM3” for short. This was in honour of a talking space monkey that David owned. An albino monkey in a spacesuit that was created and sold to honour our Lord Jesus Christ’s 2000 birthday… Go figure!

G is for… Gift