Been stupidly busy for pretty much a full week hence no action on the blog! We’d been planning for a while to decorate Mini-MaFt’s bedroom with Disney Cars stuff as Winnie the Pooh was a bit babyish for him now. Mrs-MaFt decided to start pulling wallpaper off so that the room looked a mess and we’d actually get around to doing it!

The actual decorating wasn’t too bad except for one sheet of the paper having brown marks on it and a big white patch meaning we ran out of paper…The shop where we got it from has run out and won’t get any until the end of this week – so there’s currently half a wall unpapered!! We decided that on the outside wall we would put up some polystyrene veneer just to keep it a bit warmer and reduce any dampness. The only thing being that when the paper was put over it and it dried it peeled the veneer off the wall and seems to have shrunk the paper (leaving gaps between the sheets)… Wallpaper paste doesn’t keep it down so we’ve had to resort to Pritt-Stick to keep it down!! There’s still a bit of a gap which we’ll have to put a bit of paint over (if we can find a good match) – not ideal but it’s better than pulling the whole lot off!

To finish the room off we got Mini-MaFt a racing car bed – you should have seen his face, he was soooo excited!! The bed was easy to put up until it got to putting on the stickers. There were 3 massive sheets with the vinyl stickers on them – none of which really matched the pictures in the instruction book and they all seemed too big anyway! Even more annoying was the fact that they were not even cut! So not only did we have to decide how we were going to stick them on, which we would use and which would would leave off, we also had to cut the flippin’ things out as well! It took a while, but it looks good!

Anyway, ack to work, I need to check stock levels of wallpaper and try find some paint!

Well, yes, it’s been over 10 weeks since I last blogged – and that was a rubbish one…

So, what have I been up to? Well, lots really! Still working hard though! The main reason for the lack of updates was my main PC dying. The motherboard died but it wasn’t just a case of replacing it. Noooo… stupid MaFt decided to have one of those Small Form Factor PCs (BioStar IDEQ) with proprietary innards. So, it was a new case and motherboard that I needed – slightly more expensive. Then I realised my PC was about 4 years old so none of the other, working, parts could be used with any new equipment… I had to buy a whole new system – the only bits I kept were the monitor, keyboard, mouse and DVD-burner. Also, thanks to the good folk on the GarminPOI.co.uk Mailing List who donated just over £200 the new stuff didn’t cost me anything. I just now need to get that site back up to date for everyone!

Our iron also passed-away, as has my digital camera and my camcorder… However, JVC offered to fix the camcorder for free (even three years out of warranty) as it has a faulty CCD which has caused problems in virtually every unit they were put in. So that was nice of them, shame Olympus want £150 to fix the camera (which I could buy new for less).

Oh, before I finish, here’s a great big thanks to TrixMoto for writing a script for me for MediaMonkey 3 to upload my currently playing song via FTP so I can link to it in the panel on the left! Clever stuff eh?! Also, FoxyTunes added a blogger thingy-ma-bob that shows the world what was on when I typed the post too.

—————-
Now playing: Bowling For Soup – Ohio (Come Back To Texas)
via FoxyTunes

Someone recently bought Mini-MaFt a ‘My First Remote Controlled Car’ as a “your not the special baby anymore but we feel sorry for you so here’s a present” gift. However, it doesn’t use RF as most radio controlled cars do, no, this one uses Infra Red.

Not a problem really – the car functions adequately in both forward and reverse using the supplied controller. It also functions adequately using any remote control in the house… You can be flicking channels and this little toy car starts rolling along the floor with it’s lights flashing away!

The thing is, it always catches me off guard and makes me jump when flicking between episodes of The Simpsons!

Mrs-MaFt has just accused me of being a pig. All I did was eat a pack of five mini battenburgs – I hardly feel that it deserves such a personal insult…

I blame the pregnancy hormones! 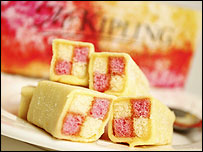 Nearly six years later I’ve finally got around to editing our wedding video. It’s taken a while but it’s now ready. Why’s it taken so long? Well, originally Brother-T was going to edit his video along with another video tht was made of the wedding but he never had time to get it done – so we just had both recordings running back to back on VHS. Now I have the technology I’ve been able to rip the original tapes onto the computer and mix the two tapes together… six years later…

Last night, after checking all 1hr 32min 53secs of the video for the second time for any mistakes etc, I decided it was ready for exporting. It was about 11pm so took the decision to leave it all rendering over night as I knew it would take about 8 hours – I could do it quicker but that would involve spending money on a new processor, which would also need a new motherboard to sit in along with new RAM and a new case too… I can’t be bothered spending all that just to speed up video rendering!

Anyway, I got up this morning to check it had done it alright and my ‘start up windows’ were showing. “Great”, I thought, “my computer rebooted before it finished”. After checking the system logs it turns out that at 3.22am my PC rebooted. The reason? Windows had installed an update and said it needed to reboot in order to complete the installation; it would do this automatically for me if I didn’t press a key in the next 15 seconds. Well, Mr Windows XP, at 3.22am how the heck am I supposed to see that when I’m in bed fast asleep? Idiot!

What’s the point in having the option ticked for only installing updates when I’m ready if it just goes ahead and does it anyway?! So now I’ve got to export it all again while I’m doing my work…

One of the down-sides to working from home is the sever lack of blog material I encounter. Working at Leeds Uni was great as I used to commute via bus, train and foot every day. When I was at Nektar I had loads of time doing nothing (and getting paid for it) so blogging was easier. However, now I’m working at home I tend not to come across any peculiar folk that I can write about. Unless, that is, you’re interested in the Jehovah’s Witness who called round the other day; or the seemingly unendless cold callers telling me I’m entitled to a government grant for free cavity wall insulation – free if you’re on benefits. Although I’m told they offer a 50% discount if you’re not – hardly free though, is it? Twice they rang today! If you think that having regular phone calls asking if we sell the finest Indian spices is fun then let me know and I can blog about that for you too… I could tell you about Kia the cats smelly breath as she huddles up next to me on the couch, but it’s hard to explain the smell with words – if you’ve ever done a dissection then I can tell you that her breath smells like the innards of a pig, actually, no, probably more like the innards of a chicken.

Monkey’s are great, you can’t beat ’em. So it was a great delight when I saw that PG Tips had stolen ITV Digital‘s advertising campaign of Johnny Vegas and Monkey to sell their bags of leaves.

The thing is, I only drink, on average, one cup of tea a month. I’m too lazy to put the kettle on, stick a tea bag in a cup, stir it, add milk etc etc. Then, when I do bother I nearly always forget and by the time I’ve remembered the kettle’s gone cold again… A glass of water is much less work!

It was fun, and we got there in the end with some help from the excellent Support guys at Blackfoot Hosting!

First task was to get everything out of there – a set of drawers and a bunch of coats and other random crap. I did find my Voice Of The Mysterons badge though! And once that was done I got measuring – ya know, to make sure it was feasible and so that I didn’t have any nasty surprises later on…

Phase 1.5 was to drill a few holes and stick some cables in fr the power. Phase 2 was to stick up a load of brackets for the shelves to sit on: 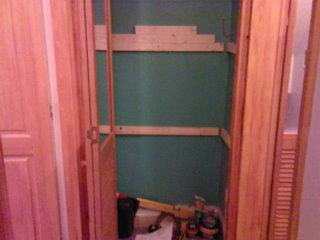 To cut the shelves I hired a magical saw that cut them itself without any kind of human intervention. As you can see from the photo below, I’m not telling porkies – you can clearly see that there are no hands assisting the saw. 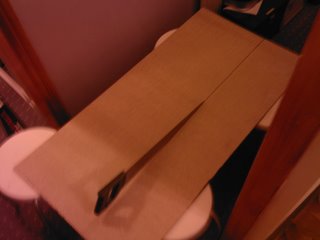 With the drawers cut to size and their perfect fit(!) confirmed I went about painting over the garish aqua with a nice, plain white. 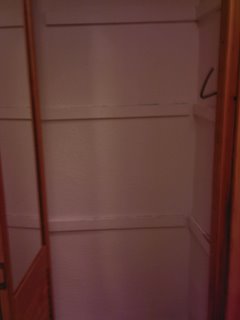 The next step was obviously to fit the shelves and then get those painted too. For the keyboard tray I just robbed the rollers from my old computer desk and used those – no point reinventing the wheel eh? 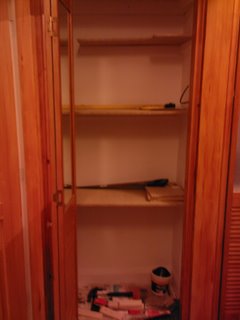 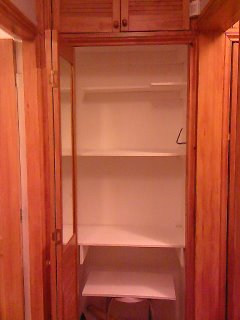 …and painted in matching white.

It was then time to move in. All was going well until I tried to put the monitor in… Erm… My measuring clearly wasn’t up to scratch as it didn’t fit… Neither did the 15inch monitor I swapped it for with Nephew-J… Damn, I’m going to have to buy a nice 19″ Widescren TFT monitor. What a shame that will be 😀 For the meantime I’m using TightVNC to control my PC via the laptop. Works well too!

Anyway, here it is in all it’s glory (sans monitor): 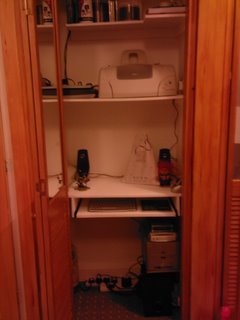 I’m not ignoring you all, I’ve just been busy with trying to get stuff sorted at home! I’ve been busy converting an old cupboard into a computer hideout but my monitor doesn’t fit in there so I can’t really use it yet (hence the lack of updates).

So, once I’m sorted and can pull a load of pictures off my phone I’ll get the blog updated!