When I used to like dance music no one ever asked my why I liked it, I was just allowed to get on with it. When I saw the light and moved into the church of punk-rock and metal I found a growing number of people would ask me why. Odd questions like “why do you like that style of music?”, “isn’t punk dead?” and “do you like The Verve?” – no, no I don’t… It was like I had to justify my musical taste just because, at the time, it was ‘different’.

The most annoying part was, and sometimes still is, being told that “rock music is full of swearing and bad messages” or being accused of only listening to it for the swearing”. Yeah, whatever :/ In the mid 90’s I got into a band called de Heideroosjes, a Dutch punk band. They had a number of songs in various languages and dialects. I had no idea what was being said but I loved the music – so bang goes the accusation that I only listened to that style for the swearing. 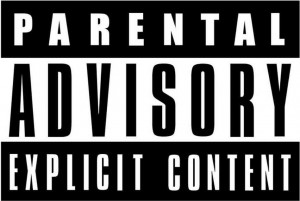 And, anyway, even if I was listening to it just for the swearing, would that really have been a problem? I mean, yes swearing isn’t big or clever (although a carefully crafted insult can be utterly hilarious at times) but surely it’s the overall lyrical theme that is more important? Take these (admittedly cherry-picked) examples below (warning: contains swears and rude stuff):

Sit down beside her like a spider, hi there girl, you mighta
Heard of me before, see whore, you’re the kind of girl that I’d assault
And rape then figure why not try not to make your pussy wider?
Fuck you with an umbrella, then open it up while the shit’s inside ya
I’m the kinda guy that’s mild but I might flip and get a little bit wilder

Paddy cake, paddy cake with no hands
Got me in this club making wedding plans
If I take pictures while you do your dance
I can make you famous on Instagram

Shake what you mama gave you
Miss behave you,
I just wanna strip you, deep you, flip you, bubble bath you
What they do, taste my rage, drop cable
Not what you will and what you want and what you may do
Completely separated til I deeply penetrate it
The I take it out and wipe it off
Eat it, eat it, love and hate it, over stat it, overawed
Every where you been can you wiggle, wiggle for the beat on double G again?

Of those, I’d rather my kids heard ‘Smash’ – yes, it has a couple of swears in it, but the message is a much nicer one…

So, J is for Justify – as in do I really need to justify my taste in music?!